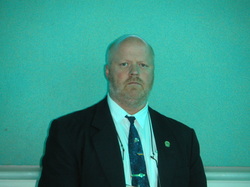 Jan Hinrichsen was appointed as "stand in Chairman" for the 2010 IWF Masters Championship in Ciechanow, Poland, by the previous Chairman, Bob Hemery.
Bob Hemery is no longer the Chairman and Jan has now taken over his position (with the approval of 2011 Congress) until electoral Congress in 2012. His appointment was approved unanimously by the IWF Masters Executive Board.
With 500 competitors in Ciechanow it was an opportunity for everyone to see how well Jan conducted himself and was ready for such an opportunity. He has been involved with the Masters since the early 1990's, a period of almost 20 years, and he is an excellent IWF CAT. I Referee.
Now please read the important 4 page newsletter below.

A big vote of thanks to the Cyprus Federation President, Mr. Damianos Hadjidamianou, for taking this championship at such short notice and in spite of some difficult obstacles he gave us a wonderfully prepared venue to run yet another successful Masters championship.
A personal thank you to my very good friend Mrs. Denise Offermann who worked tirelessly throughout the week of the championship and also competed. Denise helped many athletes to find the accommodation they wanted, she arranged the shuttlebus service, and performed many other important duties and always with a smile.
The following report is from a Fitness Magazine Editor (working in Cyprus) who was only informed about the championship via friends training at a Crossfit gym in the UK. It's a good read and a great tribute to Masters weightlifting, and in particular the women.